England captain Amy Jones has said patience is required with her inexperienced young team after suffering a 88 crushing defeats against India, which capped the tourists’ first one-day win in England since 1999.

Jones, who is standing as captain in the absence of afflicted Heather Knight and Nat Skiver, who are taking a mental health break, warned that “with youth comes paradox” after the agonizing loss at Canterbury.

Harmanpreet Kaur’s brilliant 143 didn’t lay the foundations for India, as England’s bowlers seem to have no answer in the absence of rested Katherine Brent and newly retired Anya Shrubsole.

“We are missing some great players but we definitely have a team that can beat teams like this,” said Jones, 29.

“And we want to play positive cricket, and sometimes that gives way to days when you might not always come.”

Freya Kemp, 17, had a 1–82 out of 10, the most expensive bowler ever for England in ODI cricket with India scoring 333-5, the highest total ever conceded in England.

“There are a lot of lessons that can come from this, and it will only make us better as a team,” Jones said.

Harmanpreet’s unbeaten 143 from just 111 balls secured a historic series win for India as they led 2-0 in the series, with the final at Lords on Saturday.

“I think we played really well in the first two thirds of the rounds, but she put us under a lot of pressure,” Jones said.

The young English bowler’s attack particularly struggled at the end of India’s innings, with Harmanpreet hitting the last 43 from just 11 balls, and 62 passes from the last three.

“Of course when the ball is flying around the Earth, there are times when it feels like it’s running away from you quickly,” Jones added. “But it was a very good learning opportunity for us.”

It was roles similar to Harmannbrett’s effort to win matches against Australia in the semi-finals of the 2017 World Cup, when she scored 171. She offered England no chances, punishing them all around.

“It’s a huge achievement for Team India and they deserve every bit of it,” said former Indian wicketkeeper Deep Dasgupta for the BBC Test Match Special.

“We will remember those roles for a very, very long time. I have a feeling Kaur’s roles will change things for women’s cricket in India.” 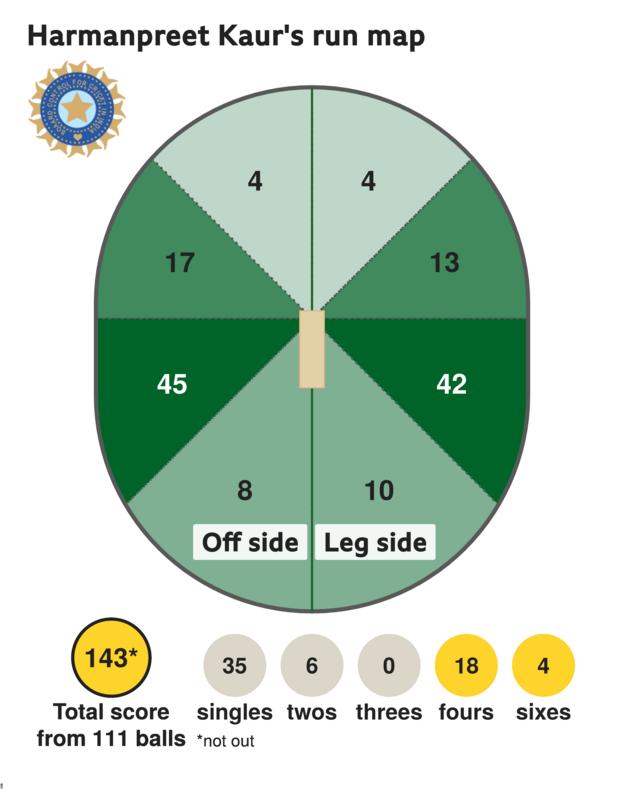